Portrait with a dog named Network 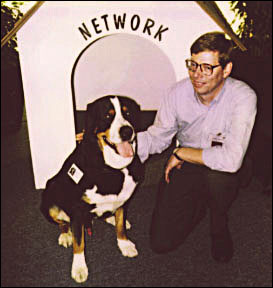 For a while in the mid-90s Sun Microsystems ran a print ad campaign featuring a dog named Network. The ads would feature a closeup of this handsome Greater Swiss Mountain Dog, usually labelled “This is Network.” The campaign never did make much sense to me. Sure, the network is the computer, but is it also the dog? How do you figure?

I attended Sun’s announcement event for its Ultrasparc line in late 1995; it coincided with Java One, the coming-out party for the then-promising cross-platform technology. Network was in attendance with his handler and a photographer with a Polaroid: Get Your Picture Taken With Network. Free. How could I possibly resist?